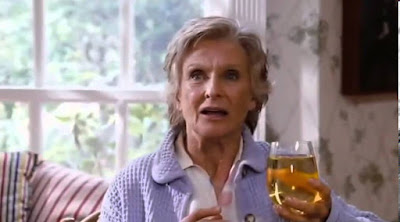 "I love everybody. That's what's killing me."

-Evelyn Wright (Cloris Leachman, Spanglish)I just found out that Cloris Leachman died yesterday.Cloris Leachman is one of those actors that can convince you to watch a movie you are on the fence about, just by being in the trailer. She won the Best Supporting Actress Oscar for her role in the 1971 drama The Last Picture Show, and has more Emmy nominations than any other television actress, and is tied for the most wins.To be fair, she cheated by being in the game for more than 70 years.She played Phyllis Lindstrom on The Mary Tyler Moore Show and won a Golden Globe playing the character on a short-lived spinoff Phyllis.Leachman played in tons of movies and tv shows from Young Frankenstein to The Facts of Life to American Gods, and as far as I can tell, she was always amazing.I will always remember her for her turn in Spanglish as the lovable alcoholic jazz singer Evelyn Wright.Evelyn was the live-in mother-in-law to a brilliant and neurotic restauranteur John Clasky (Adam Sandler), and dysfunctional mother of her wayward daughter Deborah (Téa Leoni).Leachman has a small role in this multi-genre dramedy with lots of moving parts, but as usual, she kills it. Evelyn Wright is alternately sad, funny, tragic, wise, and nostalgic. Leachman was a master of her craft, able to pull from her years of experience to deliver whatever a role called for.

“[The work] finds me and it is the most amazing thing,” she told her hometown newspaper, the Des Moines Register in August 2019.“So many times I have been like, ‘Oh God, what were they thinking? How did they connect me to this part?’ If you asked me, I wouldn’t have thought of myself for this role or this production, but they do and it comes to me and that means more to me than anything.”Cloris Leachman died on Wednesday January 27, 2021 of natural causes.She was 94.
Posted by Samax